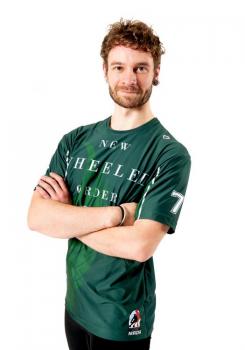 I started with Manchester Roller Derby in 2014 through the Zero to Hero intake. Having had zero experience on skates before that I found an immediate love for roller derby.  Working my way through my minimum skills and heading into Chaos Engine I played my first game against Chaos's long time rivals the Knights of Oldham for our fairly regular Christmas showdown in 2015.

Saying some hard goodbyes having been captain at Chaos Engine I moved into New Wheeled Order, ready to take on anything. My first taste of A team play came again Toulouse Quad Guards, still my favourite team to have ever played. A hard fought year to get us to play in MRDA World Champs in 2017 I managed to hit the world stage against Vancouver Murder. Following that, played against a team I'd longed to see play, New York Shock Exchange.

Since then I have played 2 more World Champs as Vice Captain with my long time partner in crime Fish as Captain. I love this team and will do everything I can to avoid missing a single training session. I now find myself as captain for our 2020 season and can't wait to see what the year brings.

In terms of kit, I skate on Antik Jet Carbon's with Arius plates. I have tried tonnes of different knee pads but have finally settled on my TSG Roller Derby 3.0's. 187 Killer Pads Slim Elbows and Dakine snowboard wrist guards for the rest of my pads and an S1 lifer to complete my set.